Smiles, conversation, and productive work fueled the twenty-three landowners that showed up on Saturday, May 25 for Hall Cleanup Day.  Everyone was busy cleaning up the inside of the Hall and the grounds outside.

Gary Haverlandt worked on a picture display commemorating the Christmas celebration at the Hall.  Joe Novak washed windows.  Margaret Heaphy and Bill Walker cut kindling which was carried into the Hall by Margaret, Becky and Suzanne and stacked near the wood cook stove.  Karen McDonough, Carmen Edwards, Bonny Ogle, Naomi Hoiland, and Alice Caldwell orchestrated the work inside the Hall while outside, trees and bushes were limbed and a fire was started to burn the debris.

The fire was guarded by Larry Wilson and brush contributors were Mark Heaphy, Jan Cauldwell, Nat Johnson, and Tom Edwards.  Bob Graham cleaned the outhouse and Jackie Graham cleaned the generator shed.   Richard Hildner brought his tractor to the Hall on a trailer and spread topsoil around the new outhouse site.   Bob and other landowners used rakes and shovels to smooth the dirt while Lee Secrest, Gary McDonough, and others moved large rocks and placed them artistically to create a beautiful landscape.   (The topsoil had been previously donated by Rob Alm.)

Grass seed was spread over the new soil by Debo Powers.  We need a load of gravel to finish the landscape job.  Duke Hoiland showed off his logging skills by expertly felling seven dead trees behind the Hall without dinging a single structure.  Duke, along with Nat, cut the trees into firewood.  There were many hands to stack firewood and haul brush to the burn pile.

It was amazing to see how fast the work was accomplished with so many people!  Everyone enjoyed a wonderful lunch of hot dogs and chili provided by Karen McDonough.  Karen’s fabulous homemade chili was a big hit with everyone.  After lunch, the last few trees were felled, firewood stacked, and brush burned.  Tom Edwards commented that more work was done in a half day than in the last three years combined.  Everyone had fun too!
We want to thank everyone who participated for all of their hard work. And thank you Debo for both the report and the wonderful pictures. Let the summer begin! 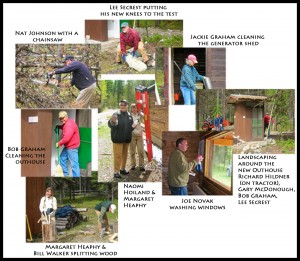