The NFLA’s Fire Mitigation Committee sponsored its annual Firewise Day workshop on July 19, 2017, immediately preceding the Summer Interlocal meeting.  About 55 people attended.  The program was compelling and well-received by attendees.

Our principal speaker was Byron Bonney, who had a long and distinguished career with the Forest Service.  He now works as a community forester with the Bitterroot Resource Conservation and Development Council, assisting landowners in designing and implementing fuels treatments.  Those treatments were put to the test during the dangerous Roaring Lion Fire in the summer of 2016.

Secondary goals are to increase forest health and to reduce insects and disease.

Since 2000, wildfire has consumed enormous resources in the United States, including both the costs of suppression and damage/loss to lives and property.  Three factors affect fire behavior:  fuels, weather and topography.  The only factor we can do anything about is fuels.  The objective is to get fire to the ground instead of spreading through the crowns so that it can be better managed, increasing opportunities to divert it around structures.

When the Roaring Lion Fire started in late July 2016, fuels work had been done on twenty of the properties within what would become the fire perimeter.  Fifteen of the primary structures within the thinned areas survived.  Many of the homes that burned were adjacent to national forest designated roadless areas, choked with fuels.  Fire generally went to the ground when it hit the thinned areas, sparing structures that otherwise might have been lost.

Mr. Bonney asked us whether we had prepared our homes and our properties for a devastating wildfire.  He emphasized the potential consequences of lack of preparedness.  For example, a fire crew may refuse to enter a property if a landowner has not done his or her part to reduce risks.  Fuels mitigation around a home and the road accessing the property is particularly important, providing a safe area for wildland and structure firefighters to work and adequate ingress and egress.

Removing flammables from your decks and immediately adjacent to the structure that can be ignited by a shower of embers is critical.  In addition, nooks and crannies, vents, and ridge caps should be sealed or screened to prevent embers from landing and igniting the structure.  Landowners must be proactive, not reactive, and must understand the consequences of their decisions.

Lincoln Chute, Fire Service Area Management Chief, and Ali Evans of the DNRC spoke about the status of revisions of Flathead County’s Community Wildfire Protection Plan.  They hope to have a draft of the revised plan later this year.  The North Fork has its own plan appended to the county’s plan.  The Fire Mitigation Committee expects to update the North Fork plan in conjunction with the revisions.  Community participation is required in the process.

Lincoln also addressed the current Evacuation process – residents can expect to receive a Warning during the first contact with the Sheriff’s Office, and then an ordered Evacuation on the second contact if time allows.  Residents are expected to be aware of the hazards of wildland fire, and when they see smoke, they need to begin implementing their preparations for evacuation without notice from the Sheriff’s Office.  If the risk is imminent, residents need to remove themselves and their most critical possessions to a safe area without waiting for a formal evacuation notice.

The Blankenship Fire Department is designated as the primary responding Department in the Fire Service Area for the North Fork.  They will respond to provide structure protection in the North Fork Valley.  Chief Ed Burlingame described the resources that can be deployed to protect our homes.  In reality, there are not enough resources available to defend multiple structures in a short time frame.  Response times up the North Fork are significant as well.

Keith VanBroeke, who worked with the Fire Mitigation Committee in its early days, is now the Deputy Forest Fire Management Officer for the Flathead Forest.  He was the Operations Assistant Fire Management Officer for Hungry Horse/Glacier View Ranger District, and is very familiar with the North Fork.  He described the staffing the Forest has, bringing in initial attack resources from other Geographic Areas to bolster their I/A capability.

The current Operations AFMO for HH/GV is Ryan Butler.  He gave us an overview of the current burning conditions.  He commented that as of July 19, we’re ahead of schedule in fuels flammability and fire potential.  He likened conditions at that time to peak dryness in August.  The Forest Service is in an aggressive initial attack mode, as seen in its response to the recent fire up Moose Creek. 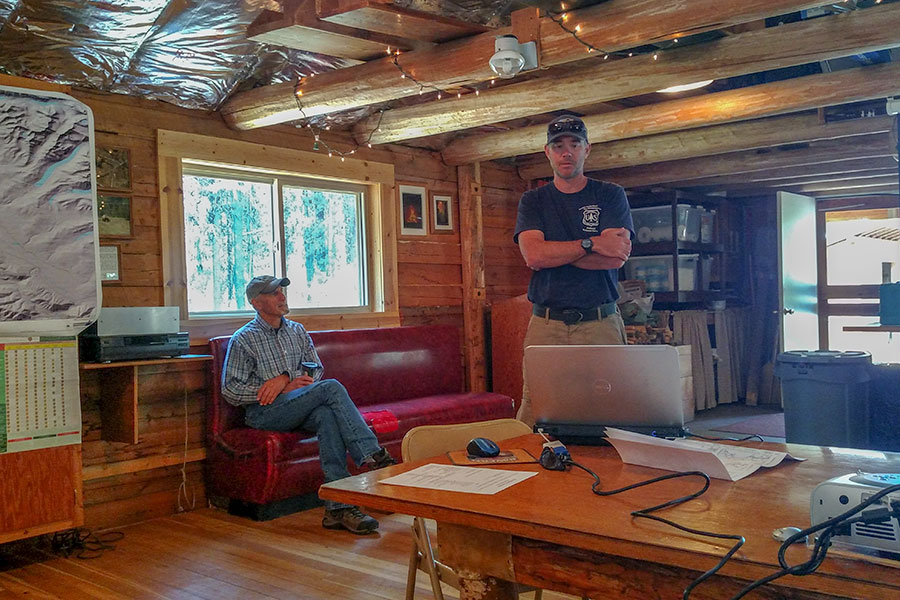 Finally, Bill Swope of the Flathead Economic Policy Council summarized hazardous fuels grant activity on the North Fork.  He called the Trail Creek ingress/egress project a “big success.”  Flathead County assisted in the project by chipping the resultant slash.  The North Fork still has a small amount of money available in its fourth grant.  Moreover, a recent $300,000 grant that was awarded to the northern end of Flathead County may be used for treatments on the North Fork.

As ever, the Fire Mitigation Committee appreciates the continuing support and collaboration of agencies with jurisdiction on the North Fork, including the participation of agency personnel in our Firewise Day workshop.

Molly Shepherd is the Co-Chairperson of the Fire Mitigation Committee and a past President of the NFLA. View all posts by Molly Shepherd