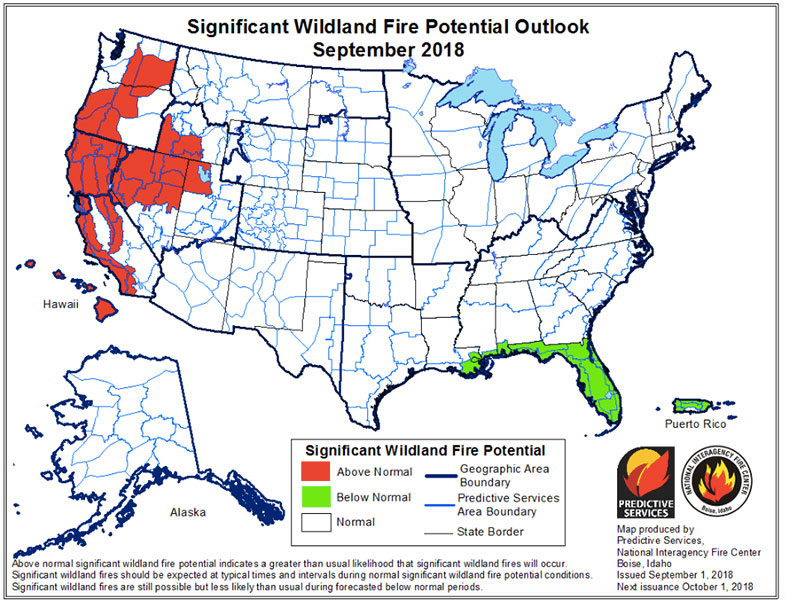 There is good news in the September/October/November National Wildland Fire Outlook that resonates with what we have seen in the North Fork. They accurately captured the season-slowing event we had on August 27 where we had widespread precip of 0.20” to 0.50” and snow on the mountains. As you all saw, that coupled with seasonal trend to shorter burning period, cooler temperatures especially overnight, and higher relative humidity recovery overnight has significantly changed fire behavior, even though we saw premature curing of grasses and shrubs (the early color change was based more on drought than photo period in my mind).

We have returned to “Normal” fire behavior forecast for Northwestern Montana for the forecast period. “The latest climate outlooks forecast the entire region to have above average temperatures and near-average precipitation for the period from September through November.” It appears that there may be a higher fire risk in Eastern Montana, but for us a return to Normal is very good. So, while it would be nice for us to see a forecast for a season-ending event in the next few weeks, in reality I think we are going to slide gradually out of fire season. I would be surprised if we see any return to significant fire indices in the Flathead. That doesn’t preclude some moderately warm temperatures and strong winds from a passing dry cold front that would cause any active fire to get up and run for a few hours with available fuels. I don’t believe we have that potential in either Whale Butte or Coal Ridge, but a new start in heavy, dry fuels could be a problem, but I think that would be a relatively uncommon event.

All in all, a good forecast for us. And we might have some good fall weather for outdoor work and burning, once we get out of fire season!

Tap below to download a copy of the September/October/November National Wildland Fire Outlook: https://www.nifc.gov/nicc/predictive/outlooks/monthly_seasonal_outlook.pdf.