Greetings, All!! As you can tell, fire season is upon us, as Lynn Ogle has pointed out.

Here is the latest monthly outlook for August, September and October.
The good news of course is that we benefited from a cold, wet June and the first half of July. The bad news is of course the hot, dry weather that has been parked over us for the past couple of weeks or so. That is forecasted to persist for a while, and we are forecasted to have a more active than normal fire season for the month of August: 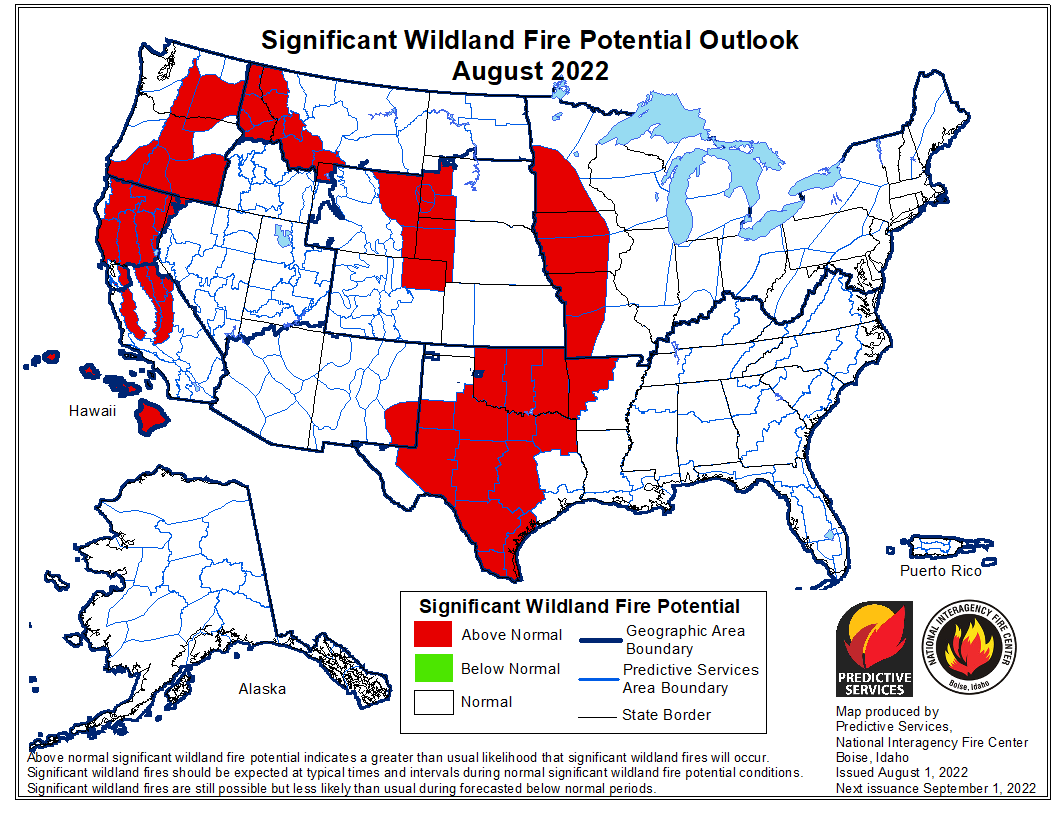 That moderates for the North Fork in September – as we see shorter days, longer nights, cooler nighttime temperatures and better humidity recovery: 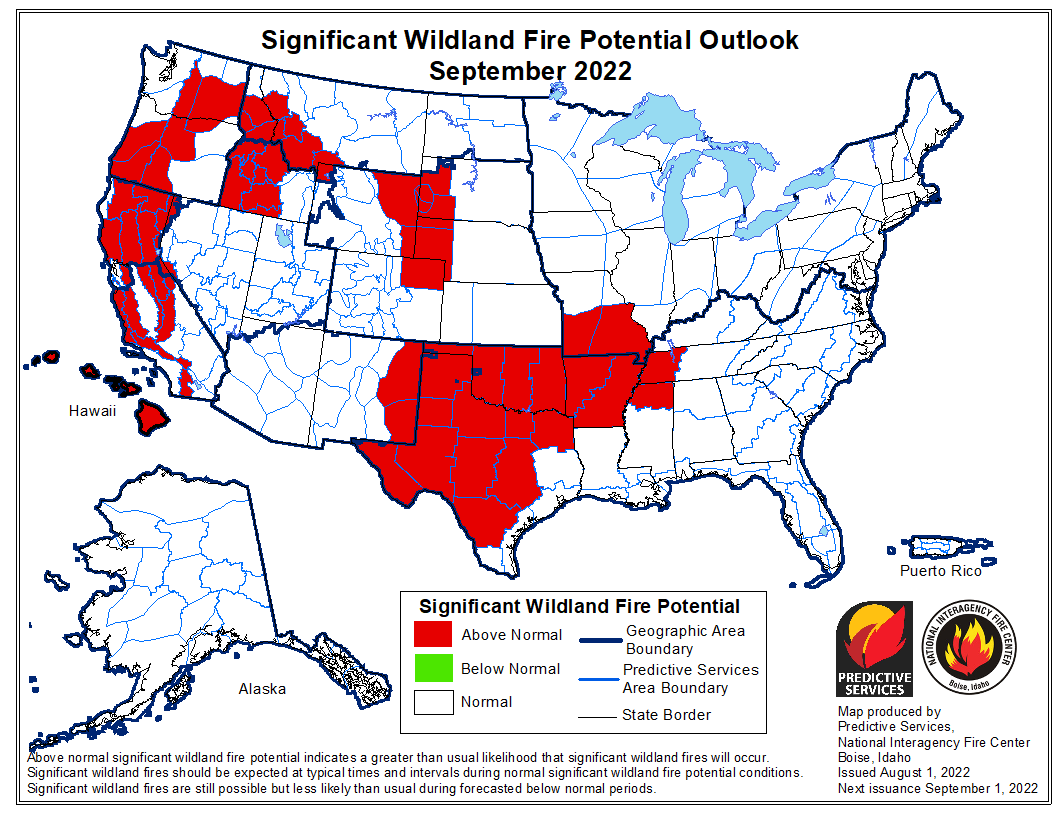 Southwest Montana will remain active, as will other areas of the country. And we know without adequate early fall precipitation, that the warm fall days and strong winds can make fires jump and run, even if conditions aren’t ideal. So, no guarantees!

October does seem to bring relief to all of Montana: 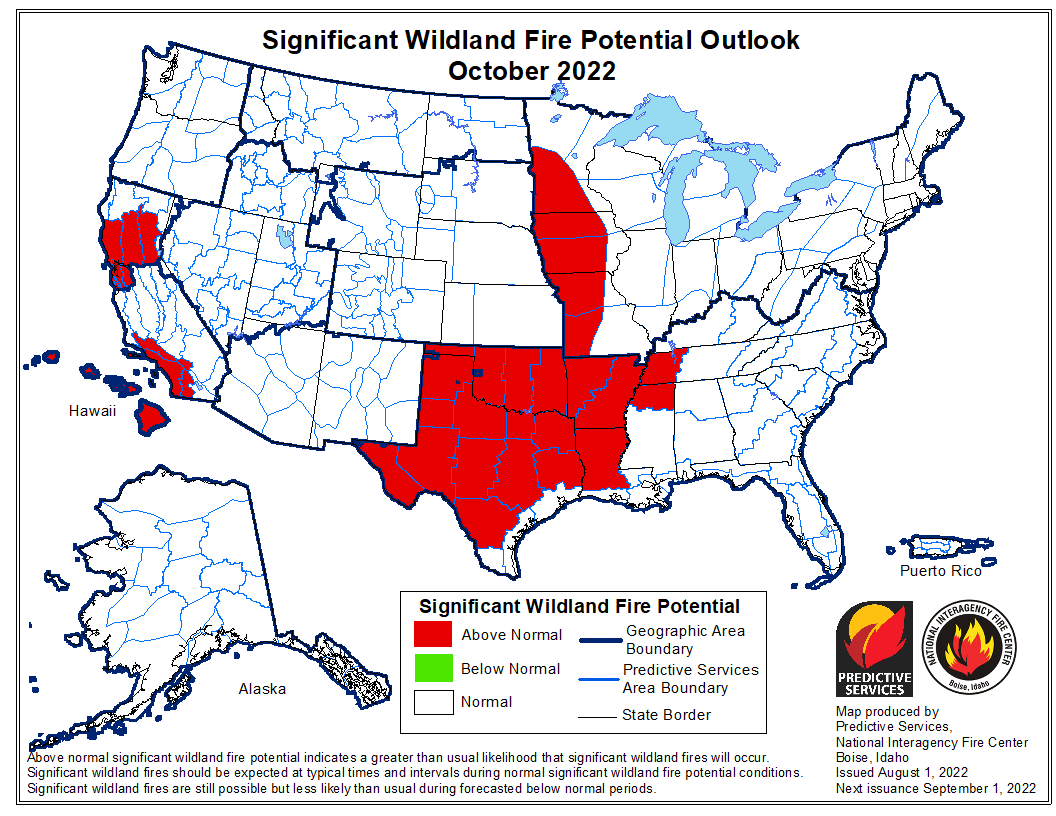 Specific to the Northern Rockies and Northwest Montana, the Outlook has this to say:

Large fire activity was minimal during the first half of July due to the cool, moist conditions over most of the NRGA through much of June, which led to slower green-up and slower than usual fine fuel curing. Large fire activity developed in the lower elevations of north Idaho and western Montana during the last ten days of July, as well as in southeast Montana, as fine fuel curing accelerated, and dead fuel moisture dropped. On July 17, the NRGA went to preparedness level two.

A significant heatwave began over the western PSAs at the end of July and will continue through early August. This will rapidly dry live and dead fuels and greatly increase fire potential to above average levels. Dead fuel moisture in most of the western PSAs are already drier than average. A pattern change seems to be occurring, with a farther westward and more northerly extent in the typical Four Corners upper-level high. This would keep the western PSAs drier and warmer than average through much of August and possibly into September. The latest Climate Prediction Center monthly and seasonal temperature and precipitation outlooks for August and the August-October periods have shifted warmer and drier than average conditions farther west, over the western PSAs.

So, any preparations for the fire season are warranted. We will have a busy six weeks or so ahead of us. I’m hoping that the moisture we have gotten in the North Fork continues to pay dividends – and that we keep getting regular shots of moisture to keep our live fuels – grasses, forbs and shrubs – resistant to burning for as long as we can.

Any questions? Remember, these are only predictions. As with all predictions, they are all in error, but occasionally useful.