Well, I had hoped that we would get a better forecast for the fire season.  This doesn’t look good. 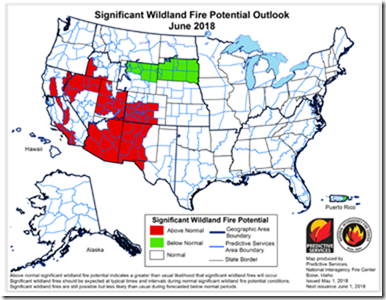 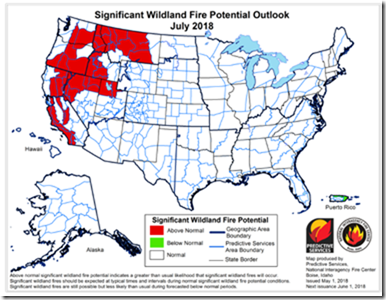 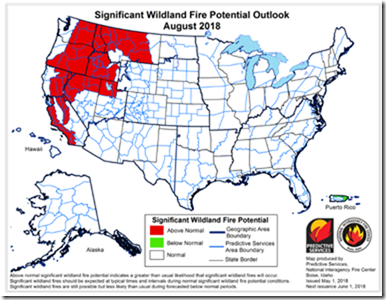 With near average temperatures and precipitation expected in May and June, Normal Significant Wildland Fire Potential is anticipated across the region as fuels will still be transitioning to drier levels, especially at higher elevations west of the Continental Divide. In early July, higher elevations may still be relatively moist due to the enhanced snowpack in the western areas. By the last half of July, however, heavy cured fine fuel loading and drier larger fuels are expected to elevate potential to “above-normal” in the Idaho and western/central Montana areas since the temperature and precipitation outlooks favor warmer and drier conditions. Above Normal potential with warmer and drier than average conditions will continue in August in those locations depicted on the maps. Southwestern Montana, Yellowstone National Park, and the Absaroka-Beartooth mountains/plateau, southwest Montana will remain near normal based on anticipated monsoonal moisture bringing adequate precipitation to these areas through the entire outlook period.

While the forecast for lightning is not included in this Outlook, the reference to monsoonal moisture moving into SW Montana implies that those air masses will be present in the Northern Rockies.  Even if the air masses dry out before hitting Northwest Montana, the residual moisture can lead to significant convection and lightning.  We can be hot and dry, but if we don’t get starts we can be OK.  If we get a lot of dry lightning under hot dry conditions, it will be very challenging.

We haven’t had back to back extreme fire seasons in the Northern Rockies in my experience.  However, we might be turning a corner on that this year.  Keep your fingers crossed and get your fuels work done and be squared away for initial attack.  Could be a bad one.