The Flathead Beacon has a good article by Tristan Scott discussing the loss of Monica and her three cubs, as well as the general North Fork community issues surrounding living with wildlife. Both the NFLA and the NFPA get a mention . . .

Twenty years ago, new arrivals to the remote North Fork Flathead River community of Polebridge were likely to hear some version of the following when asking for directions — just head north and hang a right at the pile of bear scat.

Situated on the doorstep of Glacier National Park, which merges with the Bob Marshall Wilderness to create the largest intact natural ecosystem in the Northern Rockies, the North Fork’s resident grizzly bear population has historically outnumbered its year-round residents, as evidenced by the prominent distribution of scatological droppings along the area’s trails and roadways. Still, the human interlopers who do call this wild chunk of country home have, more or less, learned how to coexist with their mammalian neighbors, reaching an accord that just comes with the territory in bear country.

And yet in recent years, due in part to the increased visitation at Glacier National Park, whose western boundary is defined by the North Fork Flathead River, as well as the expansion of commercial services in and around the community of Polebridge — leading to the development of “work camps” to house a growing number of seasonal workers — human-wildlife conflicts have been on the rise.

Polebridge, Montana [September 8, 2021] – Bear #418, known to locals as Monica, was euthanized Saturday, September 4th along with her three female yearlings, after receiving a multitude of food rewards over the past week. Due to several incidents involving improper food and garbage storage within an eight-mile radius of the Polebridge townsite the bears were ultimately deemed food-conditioned. Monica had been a resident female grizzly bear in the North Fork Valley for 17 years.

In response, two local non-profits, the North Fork Landowners Association (nflandowners.org) and the North Fork Preservation Association (gravel.org), will be working together, along with agency partners, to help improve food and garbage storage in the area as well as to make financial aid resources from conservation organizations such as Defenders of Wildlife and Vital Ground more readily available to residents and business owners in the North Fork.

The North Fork community deeply grieves the loss of Monica and her cubs and in the coming months will explore new avenues to further educate and assist residents and visitors in how to live and recreate in bear country in a manner safe for both bears and humans.

Just an update about this family group of grizzly bears.

I have been up the [North Fork] 3 times in the last 3 days and I will be up there again today.

In the past 5 days the female with 3 yearlings have gotten into two garbage cans two nights in a row. Those cans were replaced with working bear resistant Kodiak cans. The bears got into a trash trailer the next night and that has been replaced with a totally enclosed trailer. The next night they got into a pickup topper that had more than a camp stove. It had food and garbage in the truck. Last night they returned and tried to get into a different car with no garbage or food in it. They also went to another property and pushed on a trailer and were chased off by the landowner. They have been very persistent and not easy to get them to leave.

I am in the process of talking to landowners about a safe place to trap for this family group.

I am also reminding people to secure food and garbage in a way that these bears and others can’t get to it. Not in vehicles because unfortunately , this family group knows to check out cars.

Please notify me of any bear activity so I know where these and other bears are causing conflicts. Thanks.

Here’s the first North Fork bear update of the spring from Tim Manley, Grizzly Bear Management Specialist for Montana Fish, Wildlife & Parks. It was posted to Facebook on Wednesday, May 5 . . .

END_OF_DOCUMENT_TOKEN_TO_BE_REPLACED 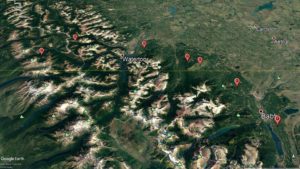 The subadult male I released at the border went immediately west to Fortine. He got into garbage and bird feeders. He was recaptured and killed.

The two females I released in Whale Creek.. also went west to the Fortine, Trego, and Stryker areas. They are hanging around a few residences and getting bird feeders and maybe garbage. No trapping effort for them right now.

The adult male that was from Helmville and released in Coal Creek is now over southeast of Babb outside of Glacier Park. He was photographed near Trail Creek following the scraggly female. He then went into BC northeast of Starvation Peak. He was photographed at a rub tree with a remote camera by BC grizzly bear researchers. That was on May 28th. In the last two days he traveled 48 miles… into Alberta, east of Waterton Lake and then south and was last known to be on the Blackfeet Reservation southeast of Babb.

I attached a map so you can see his travels from May 28th to May 30th.

They rarely stay where we release them…

Good morning, I see there have been quite a few posts about bears on this page and other pages. I thought I would give a quick update on what I know.

The 2 female yearlings I released at Logging Cr on 4/27 were not collared. Regi got a remote camera photo of a yrlg in that area in mid May.

The 3 subadults I released on May 8th at Whale Cr and the border, are all over near Fortine and Trego.

The adult male from Helmville that was released in Coal Cr on May 8th has traveled a lot. Coal to Big to McGinnis to Apgar Range to Trout Lk to Dutch to Bowman Cr to Long Bow to Kintla Cr to Border Station to Trail Cr. I think he might be the one breeding the scraggly looking female that Dick Leigh photographed. UPDATE… the breeding pair Dick posted was from a few years ago.

The scraggly looking female had two 2-year olds that she had kicked off. She is not collared and has been seen a lot around Trail Cr and Tepee. Very distinctive.

Oattie is radio collared and just came south of the border. He has been seen and photographed around Trail Cr. We are going to try and trigger his collar to drop off… hopefully in Ogles yard.

There is an uncollared light colored female with two 2-year olds that has been seen and photographed in the Trail to Whale Cr areas. I think this could be the bear we called Betsy. Just a hunch.

There is a single uncollared bear that was seen around the Polebridge Bench for a while. I thought it was maybe Monica, until I got a report of a female grizzly with 3 small cubs in the Cyclone area. That is where Monica has denned in the past. She is not collared and I expected her to have cubs this year.

As part of the population trend monitoring program there are the following collared bears in the NFK.

Again, sorry for the long post. I appreciate all the texts and photos that are posted and sent to me.
Have a good weekend!
Tim